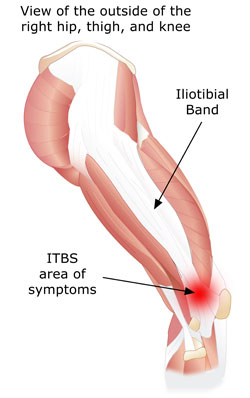 The iliotibial band (ITB) is a long, flat and strong tendonous structure that originates from both the gluteus maximus and tensor facia lata (TFL) muscles at the hip and runs down the outside of the thigh. It inserts into the outer region of the shin bone just below the outside of the knee joint (formally called Gerdy’s tubercle of the lateral condyle of the tibia).

Iliotibial band friction syndrome (also known as iliotibial band syndrome or ITBS) is the inflammation and painful irritation of the iliotibial band where it passes over the lateral epicondyle of the femur, an area just above the outside of the knee joint.

ITBS is typically the result of repetitive bending and straightening of the knee. It is commonly seen in long-distance runners that bend and straighten their knee hundreds to thousands of times during an endurance run. Cyclists may develop ITBS because of poor bike setup. ITBS has been reported in fast-growing teens as well.

The cause of this painful syndrome is usually due to a combination of stresses on the ITB such as:

According to recent clinical research, hip weakness does not appear to be a cause of ITBS in runners, but more studies are necessary. Hip weakness is common though in teens.

The information in this medical library is intended for informational and educational purposes only and in no way should be taken to be the provision or practice of physical therapy, medical, or professional healthcare advice or services. The information should not be considered complete or exhaustive and should not be used for diagnostic or treatment purposes without first consulting with your physical therapist, occupational therapist, physician or other healthcare provider. The owners of this website accept no responsibility for the misuse of information contained within this website.